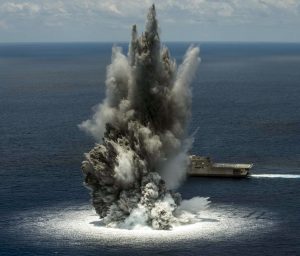 Growing global tensions and threats, compounded by deadly collisions, are bringing a renewed focus on sea power. The goal is to increase the readiness, capabilities, and capacity of Sea Services through increased investment in advanced systems and platforms able to address a wide range of operations.

Government and defense leaders are calling for urgent modernization and growth to help maintain an advantage in advanced technologies, including weapons and systems to enhance the reliability and survivability of capabilities, systems, and networks. Military standards are key to meeting these objectives, and ensuring the reliability and survivability of mission- and safety-critical systems.

MIL-S-901D has been the de facto standard for shock testing and qualification of maritime systems, including mission- and safety-critical computer systems and electronic equipment, for nearly 30 years. The 82-page MIL-S-901D document, composed on a typewriter and published on 17 March 1989, described the functional requirements for a system, including its capabilities and the environment in which it must operate, and the criteria for verifying compliance.

MIL-S-901D specified the performance requirements, but intentionally provided some flexibility in how those required results were achieved. That flexibility led to ambiguity over the years and, many argue, resulted in some suppliers taking too much latitude in testing and reporting test results. As a result, defense customers and contractors had to be cautious and confirm suppliers’ claims of compliance with MIL-S-901D, by verifying the test methods, test parameters, and internal or independent test facility employed.

System survivability should not be open to interpretation; rather, mission- and safety-critical systems should be built, tested, and proven to work reliably, especially in harsh or combat environments. To that end, MIL-S-901D has been updated, expanded, and revised into a detail specification, known for leaving little open to interpretation.

MIL-DTL-901E, like its predecessor, details high-impact shock testing requirements for machinery, equipment, systems, and structures aboard surface ships, including carriers and submarines, to “verify the ability of shipboard installations to withstand shock loadings due to the effects of nuclear or conventional weapons or environmental mechanical shock during operation.”

For the barge or heavyweight test, a large floating platform is positioned in a body of water, oftentimes the ocean, with the test article fastened to a test fixture. Explosives are positioned at various underwater depths and distances from the barge, and you can guess what happens next: BOOM. The explosives are detonated, delivering a shock to the barge, after which systems under test are studied to determine deficiencies and given a pass/fail grade.

MIL-DTL-901E, like its MIL-S-901D predecessor, is invaluable to ensuring system survivability and availability under normal operating conditions, as well as when in combat or while under attack – the worst possible time for mission- and safety-critical systems to fail. MIL-DTD-901E goes beyond MIL-S-901D with the addition of detailed production and testing procedures, extensive diagrams and examples, a table of contents with links, and provisions for testing on land. In the interest of fielding equipment faster, while saving time and money, MIL-901E adds the ability to test certain systems’ susceptibility to shock and compliance with the specification on an approved Deck Simulating Shock Machine (DSSM) on land.

Little has been written about MIL-DTL-901E to date, but much is being done to implement the detail specification. My colleagues and I were privileged to attend a barge test in Rustburg, Virginia, last November that put Crystal Group’s all-new RS1.533S18G Rugged 1.5U Server through its paces. It was an impressive sight to see the Crystal Group RS1.533S18G successfully operate through four shots under barge shock testing and pass.

Engineered to provide high-performance, highly reliable computing in even the most extreme operating environments, the Crystal Group RS1.533S18G Rugged 1.5U Server features an all-aluminum chassis with internal cross-braces and stabilized components to withstand high shock and vibration. It is MIL-S-901 certified to Grade B and Class III, and can be upgraded to Grade A and Class III with an optional shock kit and solid-state drives.

Jim Shaw is the Executive Vice President of Engineering at Crystal Group. Since 2006, Jim has led the engineering department and the new product development team.

Jim holds a Bachelor of Science degree in Mechanical Engineering from Iowa State University and a Master of Business Administration from the University of Iowa. Prior to joining Crystal Group, Jim held a management position in engineering at Rockwell Collins in Cedar Rapids, Iowa. While at Rockwell Collins, he was honored three times as an Engineer of the Year nominee for his work in high performance electronics packaging. He has authored or co-authored eight international patents.