Syncbak is a media technology company serving the broadcast television industry. Founded in 2009, Syncbak is located in Cedar Rapids, Iowa.

The company’s technologies, a combination of hardware and software enable TV stations and broadcast networks to stream live television via the Internet to in-market smartphones and tablets. Syncbak looked for a business partner to provide engineering and manufacturing expertise in creating an industrial device to serve that need.

“We selected Crystal Group based on their track record of quality and reliability.”

Find the solution that is right for your organization. Contact a Crystal Group business development manager or visit:
Web: crystalrugged.com
E-mail: info@crystalrugged.com
Phone: 800-378-1636

All trademarks are properties of their respective owners. Design and specifications are subject to change.

Syncbak’s technology allows TV stations and broadcast networks to stream live television content via the Internet to in-market smartphones and tablets. Crystal Group’s IS100 industrial server provides the hardware component to the system which is privately branded as Syncbak™.

The increased use of broadband, streaming media, and mobile devices are rapidly transforming how information and entertainment is consumed. For years, local television stations provided a mix of content on their websites but offered little more than a limited selection of news story clips, headlines, and coupons.

Meanwhile, television and website viewing habits changed along with the proliferation of connection device choices. As a result of these trends, stations experienced a shift from consumers watching TV only on traditional devices to viewers who want a selection of watching options including mobile devices.

TV over the Internet is the dream of many viewers who also want access to programming via a variety of connected devices. While the technology for broadcasting live TV over the Internet has been around for years, issues of content ownership, distribution rights, and licensing agreements slowed attainment of the online broadcast realization.

Syncbak’s technology resolves those issues by enabling broadcasters to limit the reach of live online programming to just their market area. The company selected Crystal Group to manufacture its proprietary hardware, called the Syncbox™.

For this application the IS100 server was private labeled with the Syncbak logo and imaged with patented broadcast software developed by Syncbak.

The Syncbox is installed at the local station, and intercepts the broadcast signal before transcoding and packaging streams for Internet delivery.

“We selected Crystal Group based on their track record of quality and reliability,” said Steve Maher, Syncbak’s Chief Technology Officer. “They offered us a solution by customizing their base product, which got us to market quickly and at the price point we needed to reach. Their support has been excellent, both technically and logistically.”

Station engineers, who keep the signal over the air and on the Internet, report that the IS100 is very easy to install, highly reliable, and requires little, if any, maintenance. The reliability of the IS100 has virtually eliminated business interruptions caused by device downtime, allowing stations to broadcast content to the Internet.

Since the initial rollout of Syncbox, the system software has been modified to include closed captioning and Nielsen measurement. The Syncbox is installed in over 200 stations in the United States. 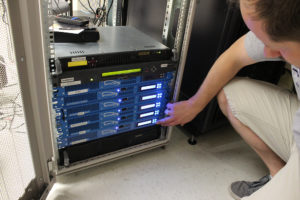 “I work with station engineers all day,” says Mike Roeder, Syncbak’s Broadcast Technology Manager. “Installing the Syncbox is one of the simplest, most straightforward tasks I facilitate. It’s really a ‘set it and forget it’ unit for them. We’re very pleased with the server’s sturdiness and reliability.”

The high dependability of the unit, flexible manufacturing options, and responsive customer support are paramount to Syncbak’s vision. These were the must-haves behind their decision to equip the local broadcast stations with IS100 servers and specialized software.

What began as a business vision has resulted in a solution that is regarded as an innovative and pioneering model for Internet broadcast infrastructure.